Friends of Sax-Zim Bog survives on its staff and board, but thrives because of our members and dedicated volunteers. So we took a morning (Monday May 22) to show them our appreciation with a birding outing and a tour of some lesser known bog hot spots…including where some of the Walt Disney movie Iron Will was filmed. Our first birding stop was at the St. Louis River public landing along Arkola Road near Toivola. The bottomland forest there includes rare tree species for the Bog such as Bur Oak,  Basswood, Red Maple, Silver Maple and Box Elder. The birds are different as well, many more connected with deciduous forests to the south. The birds and trees are at the northern edge of their range. We heard Yellow-throated Vireo and Wood Thrush and had amazing eye-level looks at a stunning Scarlet Tanager. Here we also found a large and impressive insect…the Salmonfly (a type of giant stonefly). A bit further down the road the group was treated to a elegant dance performance by a courting Sandhill Crane pair; On Overton Road we witnessed some interesting Broad-winged Hawk behavior…It was eating earthworms off the damp road!

We finished our excursion with conversation, laughing and lunch at the Wilbert Cafe in Cotton. Good food…Good times! Thanks to all our Welcome Center volunteers! Stop in and see them next winter. 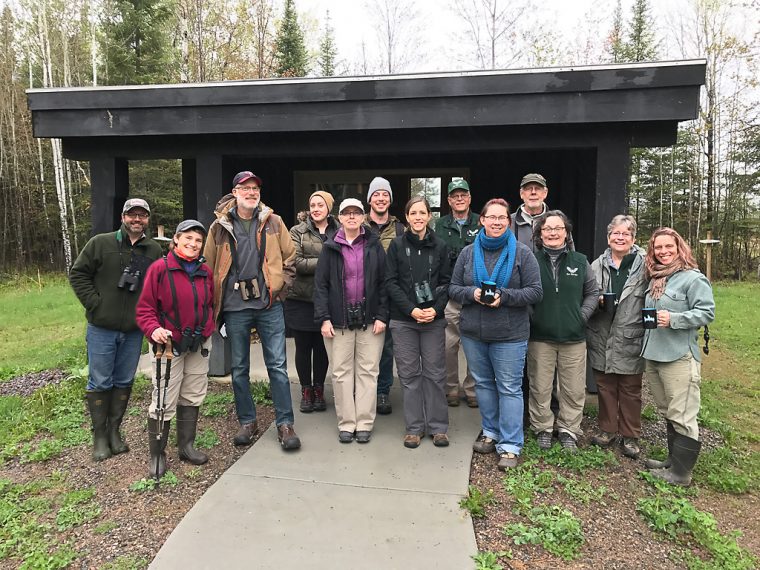 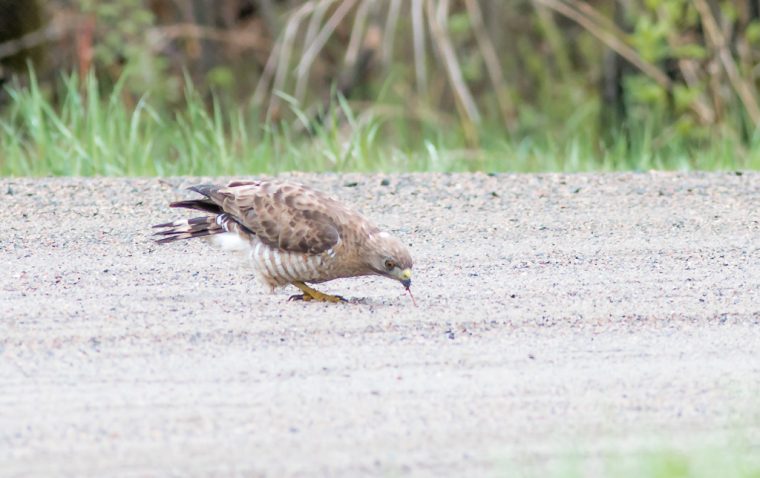 Broad-winged Hawks specialize in eating reptiles and amphibians, but this one has taken to eating Earthworms. Protein is protein! 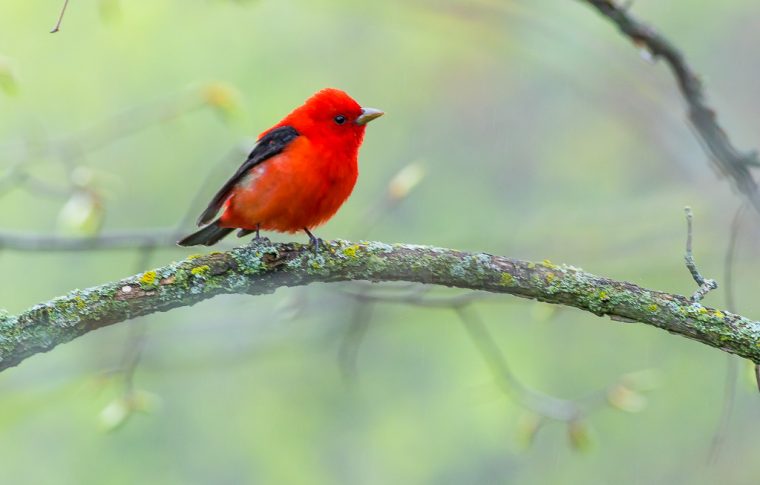 The Scarlet Tanager is not a common bird in the Bog. It is a bird of mature deciduous forests and the only place that habitat is found in Sax-Zim is the bottomland forest along the larger rivers. This one came in for a close look at the group at the St. Louis River public landing along Arkola Road. 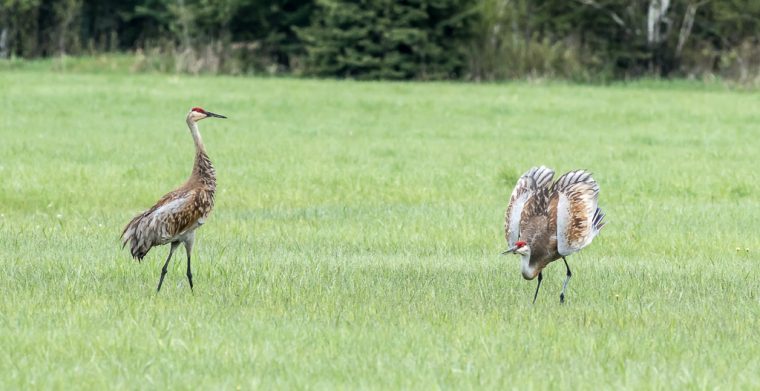 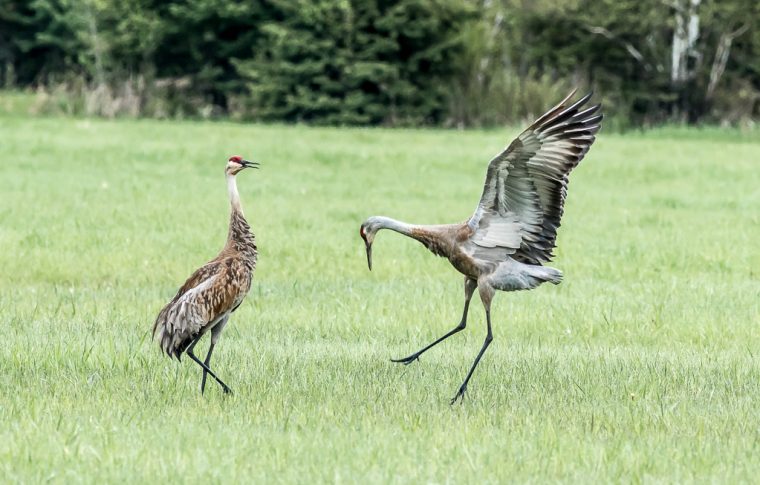 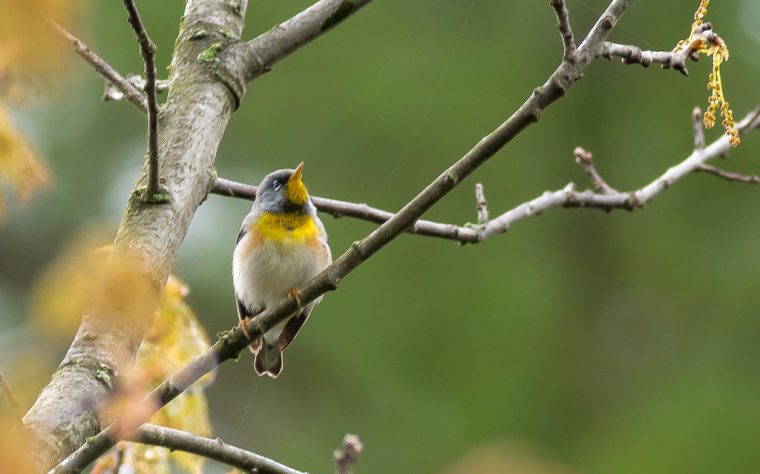 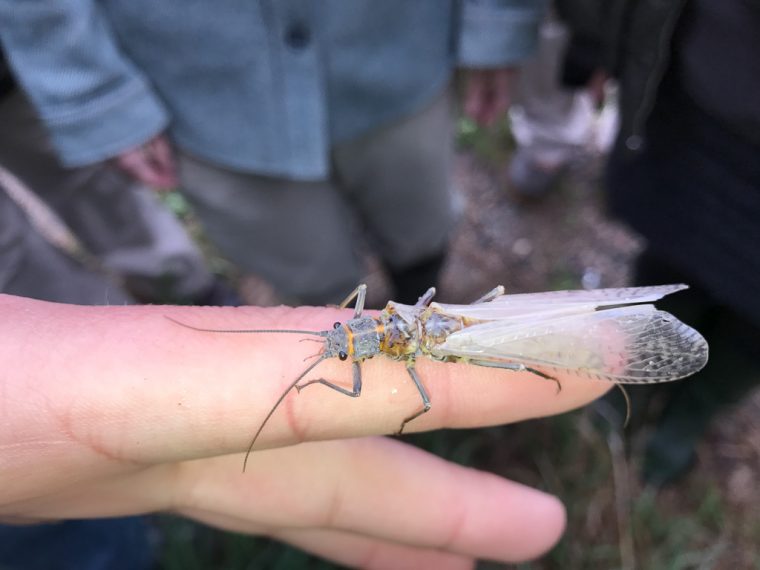 The group spotted this large insect at the St. Louis River public landing…It is an American Salmonfly (Pteronarcys dorsata), one of our species of giant stoneflies of the Family Pteronarcydae. This species takes 2-3 years to mature from an aquatic nymph into a flying adult. The name “salmon” comes from the fact that they can be pinkish right after metamorphosing into an adult. 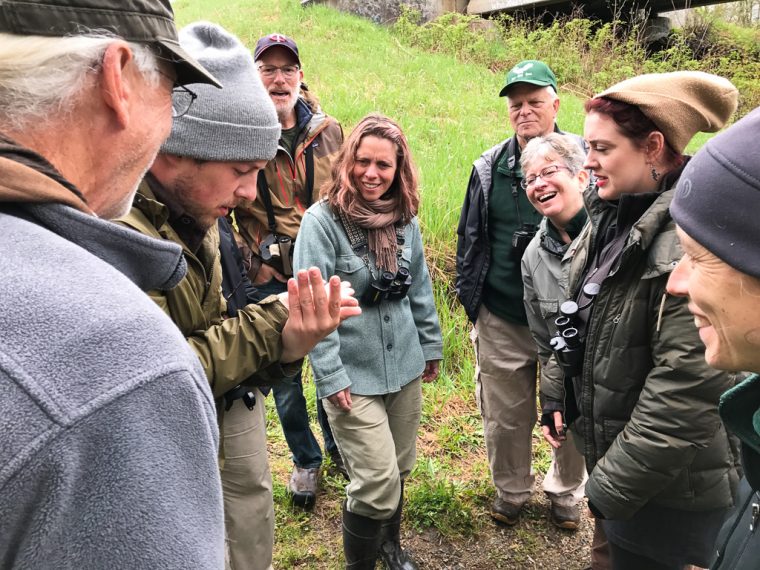 Clinton showing off the American Salmonfly to the group. 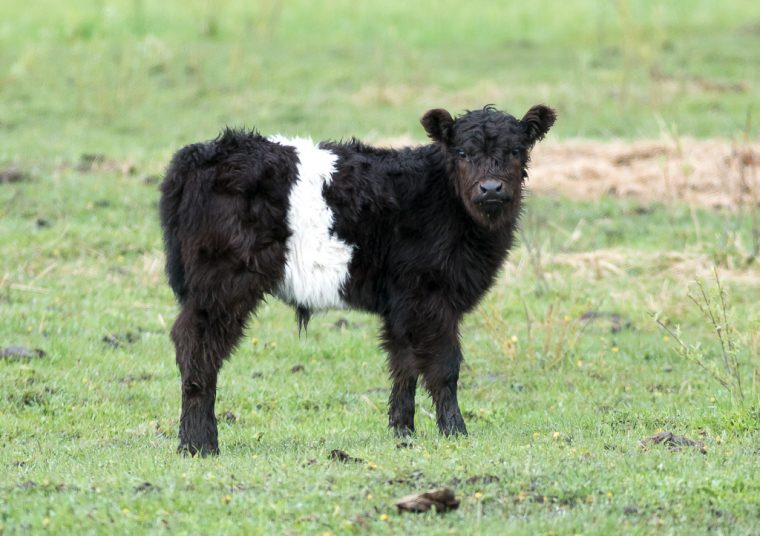 Belted Galloway calf. Though there is not too much dairy farming in the Sax-Zim area anymore, there are a fair number of cattle farms…and we are thankful! Their pasture/grazing land provides great habitat for some grassland species that wouldn’t occur here normally….Bobolink, Upland Sandpiper, Eastern and Western Meadowlarks, Brewer’s Blackbird. 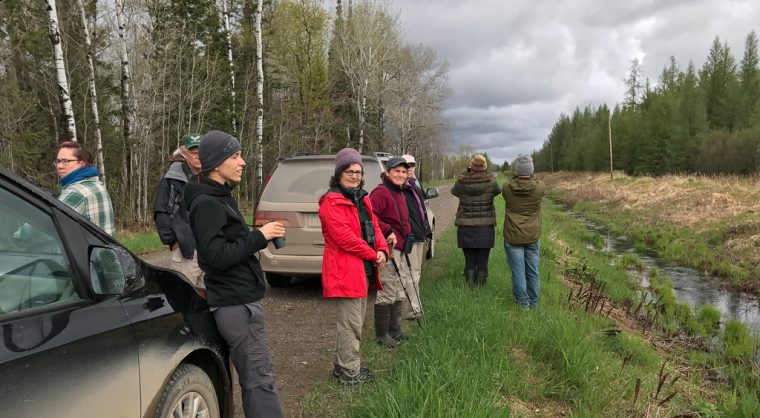 The group birding along Blue Spruce Road near the Warren Nelson Memorial Bog. 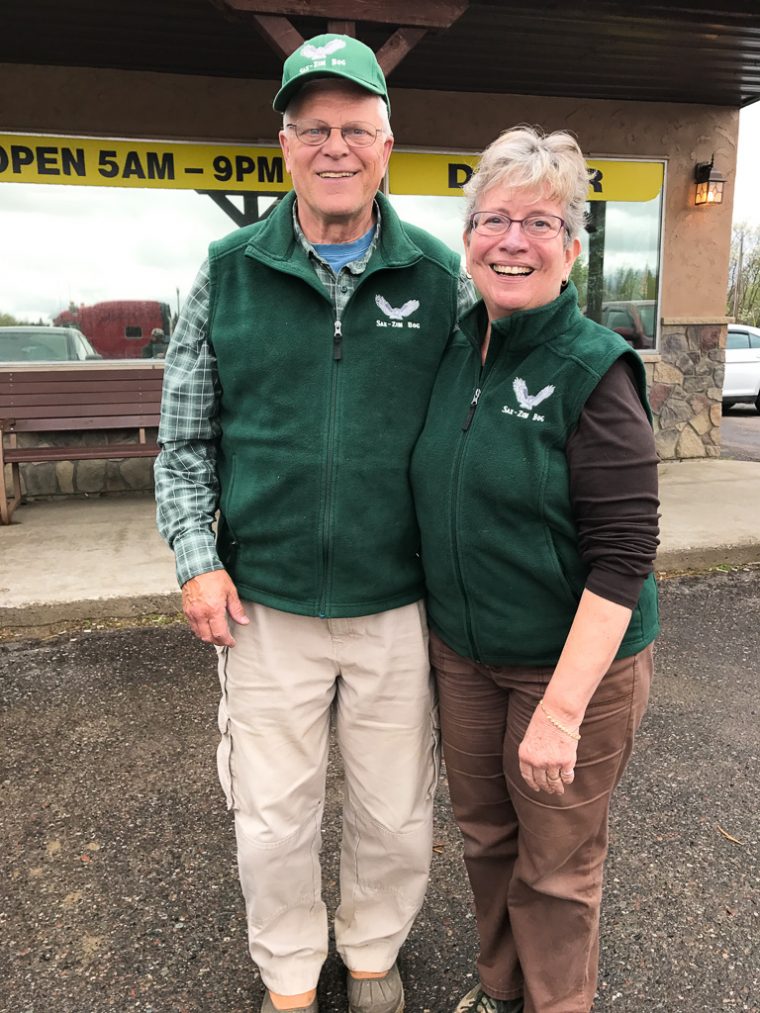 A couple of our wonderful volunteers, Tom and Carol-Ann Bloom, after our group lunch at the Wilbert Cafe in Cotton. 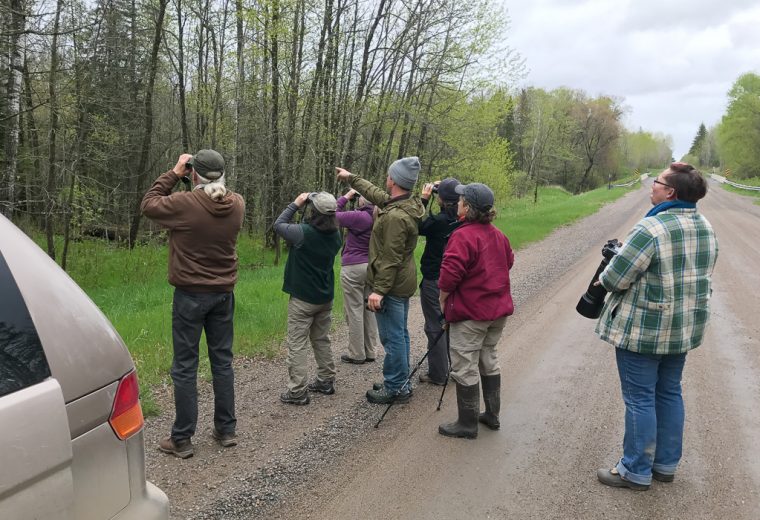 Checking on a Pileated Woodpecker nest. 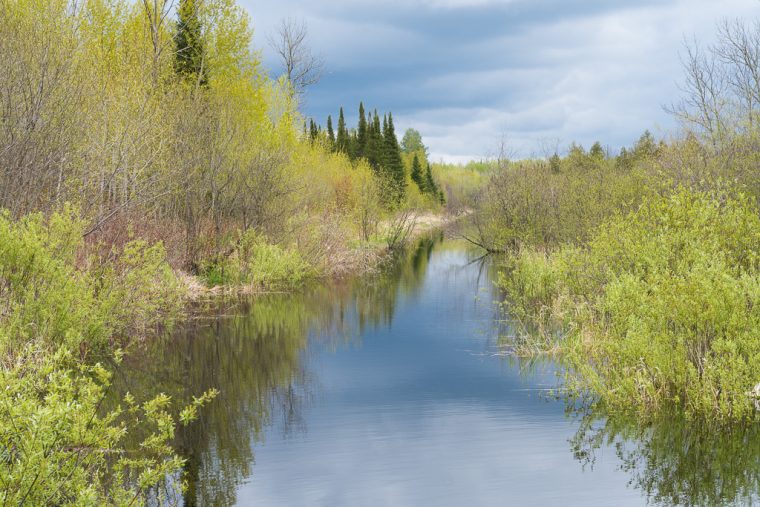 Fortunately (?) spring has been slow in developing, and the trees have not all leafed out. This is good for seeing warblers as they migrate in the upper branches. The landscape is still “spring green.”