With your help, we’ve protected 3,844 acres of Bog for future generations!

May 10, 2017 was the first WARBLER WEDNESDAY in Sax-Zim. Seven of us (Sparky Stensaas was the leader) caravanned through the Bog for about six hours and tallied 71 species….A very respectable total for so early in May. The lack of leaves on the trees and shrubs is a nice benefit of birding in the first half of May…Great visibility! We found many FOY (First of Year) birds including Rose-breasted Grosbeak, Least Flycatcher, Baltimore Oriole, Blue-headed Vireo, Veery, Wood Thrush and Bobolink.
A singing Western Meadowlark was a real treat…They are less common here than Eastern Meadowlarks (which we found later).
We turned up 8 species of warblers—more than I would have expected—including Cape May Warbler, Northern Parula, Yellow-rumped Warbler, Black-throated Green Warbler, Ovenbird, Black and White Warbler, Palm Warbler and many singing Nashville Warblers. A mini-wave at the Stone Lake Public Landing helped our total.
Sharp-tailed Grouse continue to display (half-heartedly?) on the lek along CR29/229. There were even a couple dancing on the west side of the road…on top of haybales…Showboating?
The big highlight for the group was a very cooperative Black-backed Woodpecker at the Warren Nelson Bog along Blue Spruce Road. This drumming male was the LIFER Black-backed for 3 of our participants!
On the way to the field trip, several folks saw Porcupine feeding on willow catkins…a favorite spring food. Sparky saw three! The group also tallied Boreal Chorus Frog, Spring Peeper, 7 sunning Western Painted Turtles and a Muskrat.

Our group watches a drumming Black-backed Woodpecker along Blue Spruce Road. It was a Lifer for 3 participants!

We started out the day with 6 Sharp-tailed Grouse along CR29/229 south of Correction Line Road. Several were still half-heartedly dancing on the lek, while this show off displayed atop a haybale.

The town of Meadowlands is rarely birded, but we slowly cruised the streets and found two birds not easily seen in the Bog…a Northern Cardinal and this Baltimore Oriole feeding on jelly.

This drumming male Black-backed Woodpecker at the Warren Nelson Memorial Bog entertained the group for about 10 minutes.

Sparky predicted 5 species of warblers before the field trip, but we actually found 8 species including this handsome Black and White Warbler.

Yellow-rumped Warblers are the first warbler to return to the north each spring. They breed in the Black Spruce bogs across the North. 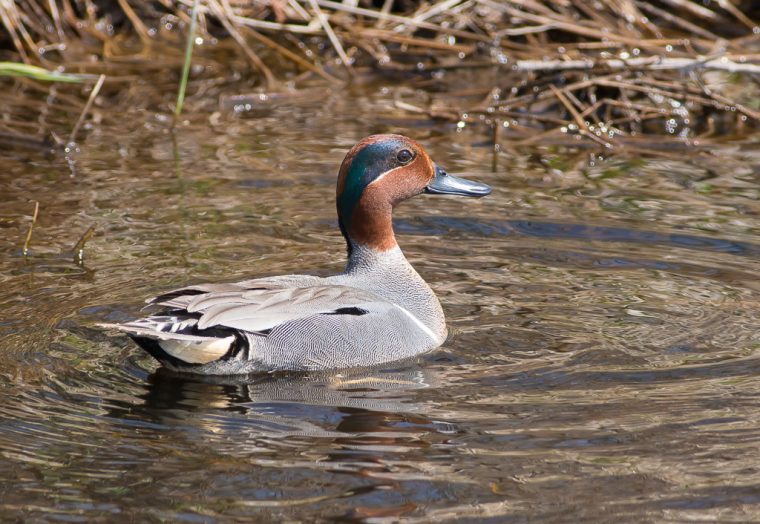 The Green-winged Teal is a spring migrant in the Bog…and not a very common one. This one was in the ditch along Stone Lake Road.

Right at the Welcome Center we found this Red-breasted Nuthatch nest cavity. The nuthatch and a Black-capped Chickadee were contesting ownership!