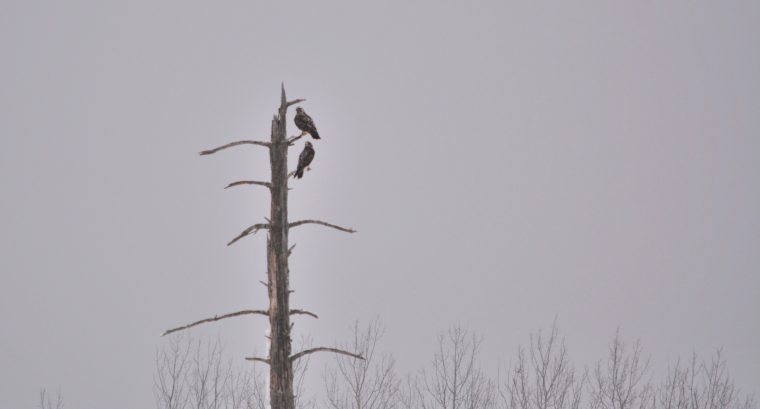 A presumed pair of Rough-legged Hawks (female above, male below) from the Feb. 28 Winter Raptor Survey. (Photo by Clinton Nienhaus)

Winter in the Sax-Zim Bog can offer much for a visitor to see: Dramatic snow covered landscapes, bright winter finches, elusive Great Grey Owls, and beautiful black spruce/tamarack bog. Often, visitors will stop by to check out the Welcome Center for information on where birds have been seen or to hear the Friends of Sax-Zim Bog story. One thing that visitors do not get a chance to see when visiting is the citizen science being done behind the scenes.

Citizen science may be a new term for some, but likely, you know one or two folks who have mentioned this word or participated in Citizen Science. Citizen Science refers to the collection of scientific data by the general public, most often in conjunction with scientists or projects. Audubon Christmas Bird Counts (CBCs) are one of the best examples of citizen science and this winter saw the completion of the 117th Annual Christmas Bird Count. CBCs are a great way to get birders involved in science as they allow for the average birder to have an impact on the greater scope of bird research in the US, without having to be specialized in a species or hold a Doctorate in Ornithology (more CBC info here).

Citizen science exists outside of just CBCs. Amateur entomologists, odonatists, lepidopterists, herpetologists, mycologists, etc. can have a huge impact on science even if they don’t have the specific training or expertise. Of course, it helps to have an excitement and knowledge base in what you are interested in, but now a days, a picture can say a thousand words! Many citizen science databases (iNaturalist, Odonata Central, Bumble Bee Watch) require photographs of species to correctly ID individuals and keep data robust. Other citizen science ventures (Golden Eagle Surveys, Frog and Toad Surveys, Owl and Nightjar Surveys) require training, which allows those with interest to participate and offer high quality data.

Adult female dark morph Rough-legged Hawk seen on the Feb. 28 Winter Raptor Survey. Dark morph rough legged hawks may be tricky to identify to some. A good way to ID them is to look for the “rough” legs! Rough-legged Hawks have feathers all the way down to their feet, which you can see from this bird. (Photo by Clinton Nienhaus)

Winter Raptor Surveys are put on by the Hawk Migration Association of North America (HMANA) and are completed by the general public throughout the United States. Winter Raptor Surveys are completed between late November and early March with the goal of monitoring wintering raptors, owls, and shrikes. Participants are encouraged to build routes based on the knowledge of their area and routes can be 10 to 100 miles in length!

Data collection for this survey is pretty straight forward: you need an interest in birds of prey, a way to collect GPS data, and a penchant for field observation of birds. Fortunately, I have a slight obsession with raptors and have participated in this sort of field data collection in previous surveys! Winter Raptor Surveys are one of my favorite things in the winter season. One gets to experience the extent of the Bog looking for and documenting winter visitors and contributing to science on wintering habits and populations of northern visitors.

This season helps paint a picture of the true value of the Sax-Zim Bog as a migration stopover for Rough-legged Hawks and Bald Eagles and also offers questions that others can investigate further. First, let’s see what data was collected this season!

The data collected during Winter Raptor Surveys is used by researchers in coordination with HMANA who are interested in wintering raptor populations or in specific species winter habits. Our data offers some interesting insights, but those insights may not be obvious, just based on numbers alone. Interesting to note from our numbers is the distribution of Bald Eagles, Rough-legged Hawks, and Northern Shrikes through the survey period. As you can see, Northern Shrikes were very consistent in numbers observed through the season, with a slight up-tick in December compared to November. This is not the same case with Bald Eagle or Rough-legged Hawk observations.

A Northern Shrike perches atop a dead spruce in the Sax-Zim Bog. These perch hunters eat everything from voles to songbirds! We had Northern Shrikes on every survey this winter. (Photo by Clinton Nienhaus)

November Bald Eagle numbers were incredibly high, as were February Rough-legged Hawk numbers! But why? Why are those numbers so high at those times in the season and not others? Migration! November in northern Minnesota was incredibly mild, meaning that Bald Eagles who were migrating south did not need to “hurry” south, as they still had access to food and open water. Once winter takes hold, Bald Eagles generally are around in only small numbers. Rough-legged Hawks, on the other hand, took their time heading south this season. However, they are right in the peak of their northward migration, back to breeding grounds in northern Canada and Alaska, which is why we see big numbers at this time of year!

Citizen science allows for the most efficient use of time for researchers who cannot be in every place at the same time. Science funding for research can be scant and having “free labor” really helps cover ground and gather data. Of course, there are protocols to take to make sure that citizen science data is robust and rigorously proven to be accurate, but for the most part, citizen input is becoming important to science. eBird is a good example of this, as is Bumble Bee Watch. Each database allows for citizens to impact science. Bumble Bee Watch is a site dedicated to conservation and recording observations of North America’s bumble bees. To participate, one just needs to snap a photo or two of a bumble bee and send it, with location information, to be verified by experts. This helps keep a database of these sensitive and declining species, tracking where they are, but most importantly, where they are no longer.

Citizen science is great way to get involved in the outdoors, for folks of any age and ability! You don’t have to be an expert, you don’t have to travel 1000 miles from home, you don’t even need a field guide (in some cases!). All you need is a push in the right direction and support from fellow citizen scientists! There are opportunities to participate in Citizen Science in the upcoming spring season with Friends of Sax-Zim Bog, including a BioBlitz, American Kestrel Nest Box monitoring (and building!), and others to come. Stay tuned for these developments on our website.

Spring is almost here! We will see  you out in the winterless Bog soon!