The Sax-Zim Bog may be a haven for boreal bird species, but there is much more than the diversity of resident bird species or winter visitors. With the recent completion of the fourth Bog Bioblitz, the Master Species list has documented observations of  over 850 species, including observations of trees, shrubs, vascular plants, grasses and sedges, ferns and clubmosses, fungi, lichens and mosses, reptiles, amphibians, birds, fish, terrestrial invertebrates, moths, butterflies, bumble bees, tiger beetles, spiders, and mammals. Some of these species are better documented than others (birds, for example), but each adds its own beauty to the area.

Following the completion of the Bog to Ridge BioBlitz, July 16 and 17, the Master Species list sat at 863 species. An impressive tally, but tantalizingly close to a more round number, in 900. There are a few gaps in the species list, chiefly terrestrial insects, fungi, lichens, aquatic invertebrates, and moths. I recently went out in the field to document a few of the lesser documented species. Particular targets included lichens and moths, but as luck would have it a few insects and a plant or two were also added to the Master Species list during the “mini-BioBlitz.” If you are interested in looking at the numbers, 37 species were needed to reach 900, going in to July 30. With the holes to fill, would the target of 900 species observed get reached in only one day? What surprises would be in store? 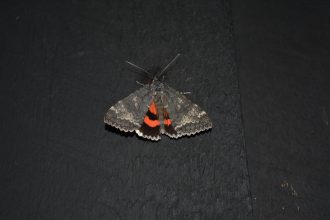 The title of this post may have given it away, but the mark of 900 was reached. But not just reached, sprinted past! 65 species were added by myself and Kristina Dexter, including 31(!) species of lichen (Common Freckled Pelt, Common Tree Firedot, and Eastern Starburst Lichen), 22 species of moth (Great Tiger Moth, Large Maple Spanworm Moth, and Three-spotted Crambus), 6 species of insect (Jagged Ambush Beetle and Humpback Fly), 2 species of bumble bee (Northern Amber Bumble Bee and American Bumble Bee), 1 species of fungi (Yellow Swamp Russula), and 3 species of plant (Sky Blue and Panicled Aster, and Woodland Thistle)! As you can see, there were some distinct gaps in documentation of some species, especially lichens. Almost all of the lichens observed were tree specific lichens, with a few ground specific species of lichens. Another group that was targeted were moths. Moths in the northwoods are incredibly diverse, but not much is known about the full collection of species. In fact, the 900th species observed in the Sax-Zim Bog was a moth: Briseis Underwing! The 22 species of moth added to the Master Species list brought the moth species tally up to 68 species, which still leaves room for additional species to be added, based on habitat type and flight season.

Pictured above are a few of the new species to the list: (Bottlebrush Shield Lichen (UL), Humpback Fly (UR), and Great Tiger Moth (LL)).

With the completion of the “mini-BioBlitz” there was yet another opportunity to document species for the Master List. The Natural Resources Research Institute, an extension of the University of Minnesota-Duluth, has a research site (FENS) within the Sax-Zim Bog. August 2nd saw an opportunity for myself to join Kurt Johnson (FENS site steward) and Brett Groehler (UMD photographer) to photograph and explore the site for an upcoming UMD calendar series. Not only did the group venture out in to a marvelous wetland/bog restoration, but 6 new species were added to the Master Species list! Three species of plant (Arrow-leaved Tearthumb, Swamp Thistle, and Tall Blue Lettuce)  and two species of moth (LeConte’s and Confused Haploa) were added to the list from this site. Wetland species (read non-bogland) are hard to come by in the Sax-Zim Bog due to nutrient conditions in the relatively nutrient poor, acidic bog soils or easy access to non-bog type wetlands. A few Lesser Goat’s-beard plants from the Friend’s of Sax-Zim Bog Welcome Center completed the list of new species from August 2, bringing the day tally to 6 new species. If you add these to the newly added 65 species from July 30, the complete Sax-Zim Bog Master Species List to 934 species!!!

Lichens are an important species in boreal ecosystems. Here is one of the more common lichens found on trees in the Bog: Boreal Oakmoss Lichen. (photo by Clinton Nienhaus)

934 is a large number, nearly 1000, but when we quantify species in one area: what does 934 really mean? In the easiest way to breakdown this number, consider first the human perspective. To document these species, they first have to be found by someone! Whether it is volunteers, casual observers, field trips, naturalists, or even novices the observations that get documented are important and not exclusive to the experts. Photography especially is important in documentation of species by anyone and everyone. A simple click of the camera could potentially add a new, rare, or interesting species of insect, a new flower, or mammal.

A large and angular moth, this Large Maple Spanworm Moth can be found in three different color variants, yellow, white, and brown. All three of the color morphs were observed during the “mini-Blitz!” (photo by Clinton Nienhaus)

« Bog to Ridge BioBlitz IV nets over 420 species! (374 at Sax-Zim Bog) Board of Directors Pays for Annual Report Printing! »