Minus -26F was the low recorded by participants on both Friday (Sax-Zim Bog) and Saturday (Isabella, MN) of our 8th Annual BRRRRdathon, living up to its reputation as the World’s Coldest Birdathon.

This was the first year of our new points system in which all birds were given  a 1-5 point value depending on their rarity in the “playing field” of NE Minnesota and NW Wisconsin. Some grumbling was heard about Sparky’s assigned values but overall it seems to have added a fun element of strategy to the contest.

17 hardy participants joined the effort, with over half of those competing in the Wintergreen division (or should we call it the “What are you Thinking?” division?…or maybe the “Crazy” division?). These Wintergreeners traversed Duluth and Superior on fat bikes (mountain-style bikes with really fat tires) and endured hours of bone-chilling cold…and they even create their own windchill when they ride.

Unfortunately the birds were more sane that the birders, and many were hunkered down to save energy in the bitter cold. Only 55 species were tallied by all teams. This is our second lowest composite total since the event’s inception in 2011 when only 50 species were found (73 species is the record total set in 2017 and 2012).

A couple surprising MISSES included Red Crossbill and Snowy Owl (though Sparky saw one on the way to buy the lasagna for the compilation dinner in Superior!).

Thanks to Duluth Folk School for hosting our compilation dinner, and to all the frostbitten participants! See you next January! (Tentative dates for next year’s BRRRRdathon are January 11-12, 2019) 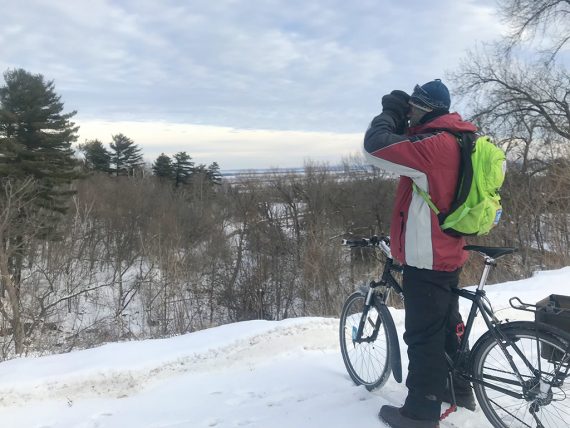