Over 70 “bog buddies” flocked together to support us and our mission to Preserve, Promote and Protect the Sax-Zim Bog. This total was about a third less than last year, but I have a sneaking suspicion that a certain football game interfered with attendance. No matter, we all had a wonderful time and enjoyed the usual appetizers presented in an unusual manner…”Snowy Owl bars,” “Connecticut Warbler eggs,” “owl pellets,” shrimp (hey, not all of us are as creative), and an owl-shaped vegie tray.

Sparky emphasized that the Sax-Zim Bog is YOUR Bog…not Friends of Sax-Zim’s Bog. We all need to be stewards of this precious place. Our East Stone Lake Bog tract was featured and SIX members responded by donating $3,000 for their own legacy acre of this bog ($1,000 per acre): Big Thanks to Lois and Richard King, Sheryl Sostarich and John Sostarich, and Ken and Carol Ellstrom. (They join 3 other folks that also recently purchased a legacy acre here…Kudos to Mark Dudek Johnson, Scott & Nan Wischerd, and Gene & Julie Ollila (Julie surprised Gene with this gift!). There are still three 1-acre segments available for naming…a $1,000 donation is required. A separate donation of $20,000 will secure naming right to the entire 26 acre tract.

Sparky also premiered the second Clinton’s Critters video, this one about the natural history of the White-winged Crossbill. Clinton and Sparky have a bunch more ideas, so stay tuned!

Another big announcement at this event was the introduction of a film that Sparky is working on called Boreal Wings: Bird Superheroes of the Northern Forests. This video will highlight about a dozen boreal bird species whose “superpowers” allow them to survive and thrive in the bogs and forests of the North Woods. Head Naturalist Clinton is working on a companion curriculum to the film. Both the DVD and curriculum will be sent to EACH OF THE 2500 SCHOOLS IN MINNESOTA! We hope to inspire the next generation of bog buddies. The film’s budget is $25,000 and we’ve already garnered $15,000.

Original bird art on the tiny canvasses was definitely the highlight of the Silent Auction. We received a bounty of fun and very artistic bird creations. Most were paintings on canvas, but folks also sent us stained glass creations, wood scroll work, glass sculpture, pencil and even photos printed on wood and metal. The biggest ticket items that sold were the guided half-day Bog trips by Clinton and Sparky. We did not have any takers for the amazing framed, signed and numbered Roger Tory Peterson prints, but we will likely work with an auction house to sell these treasures donated by Steve & Diane Millard. Super High Five to all who donated art and objects! The Silent Auction garnered $3,383 including the five paintings and walnut bench that sold in the pre-event online “buy-it-now” period.

Al Batt sauntered up to the front and began telling us stories…hilarious tales that involved chickens, chewing gum, the phrase “Uff da”, a Southern Baptist mother, a wise and kind librarian…all woven around memories of his first bird book. A wonderfully funny 45 minutes! I never get tired of his stories. Thanks Al! 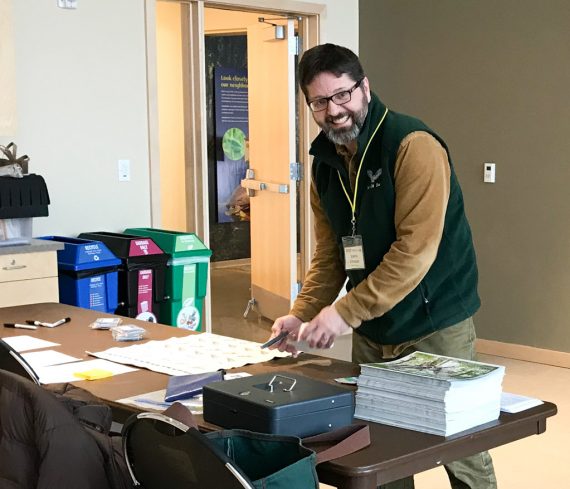 The Silent Auction was brimming with neat original bird art.

The Tiny Canvas bird art project will continue next year. 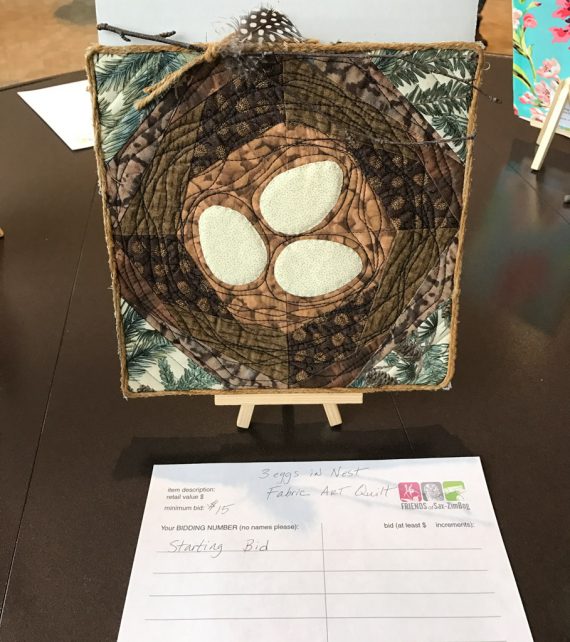 We have talented members! 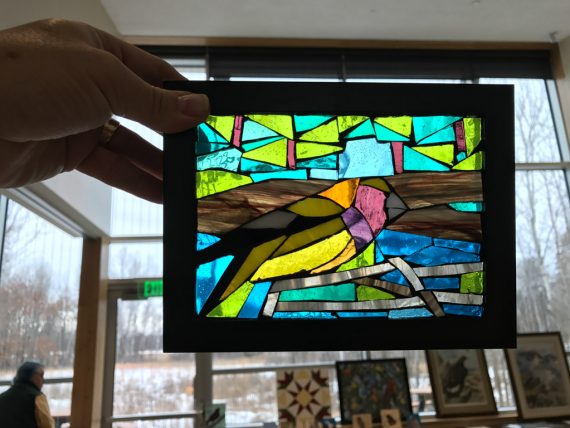 Large selection of Silent Auction items including a stunning metal print of the Northern Lights donated by Heidi Pinkerton of Root River Photography.

Judy and Tim Walker joined us. They are the Legacy Donors behind Winterberry Bog. 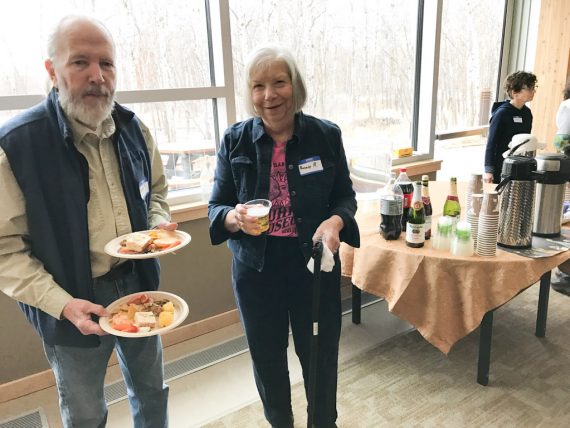 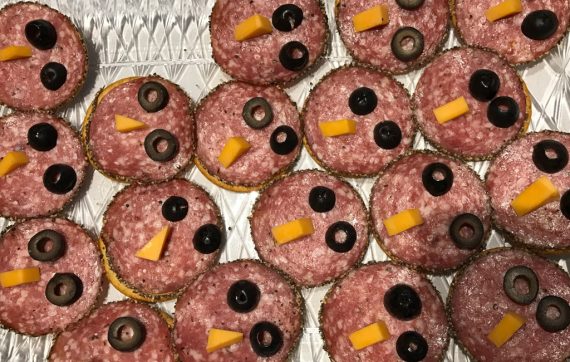 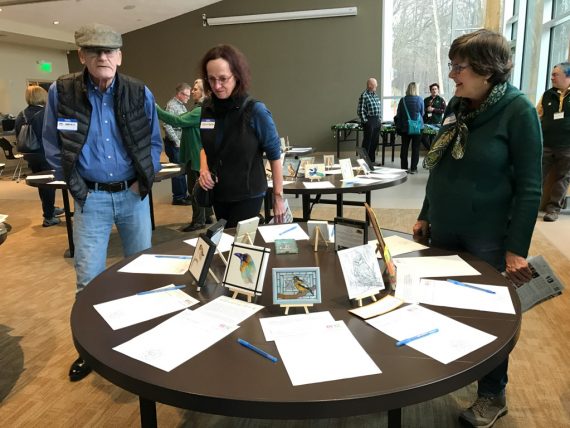 Sarah Beaster’s Vegie owl survived for a short while…but was pretty well demolished an hour into the event. 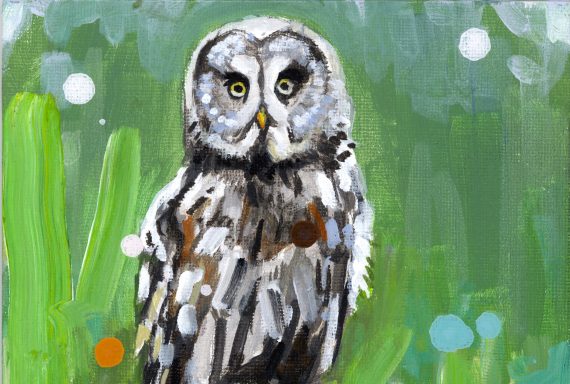 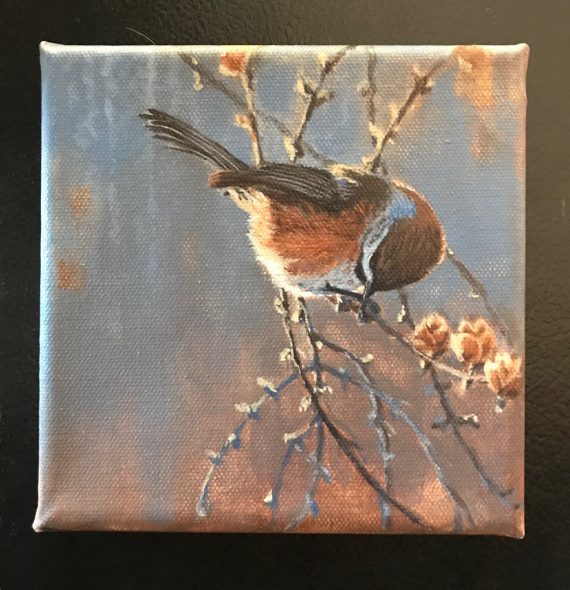 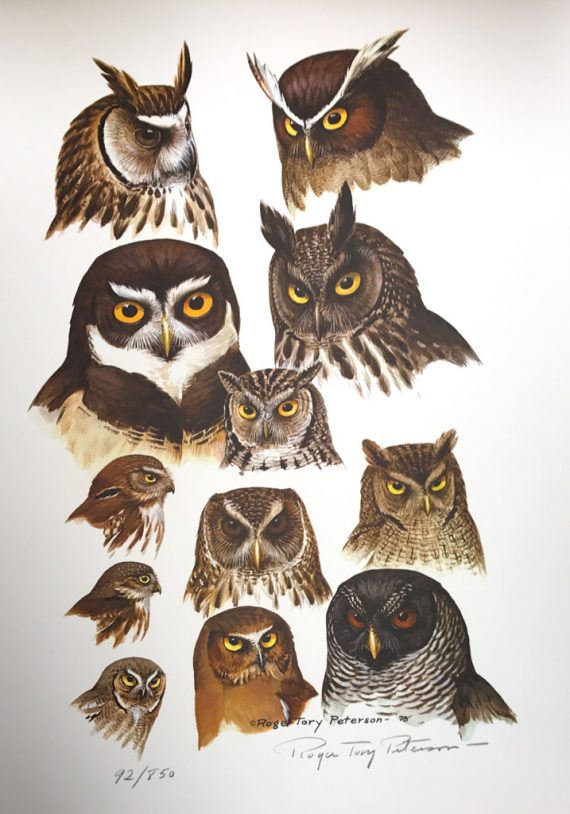 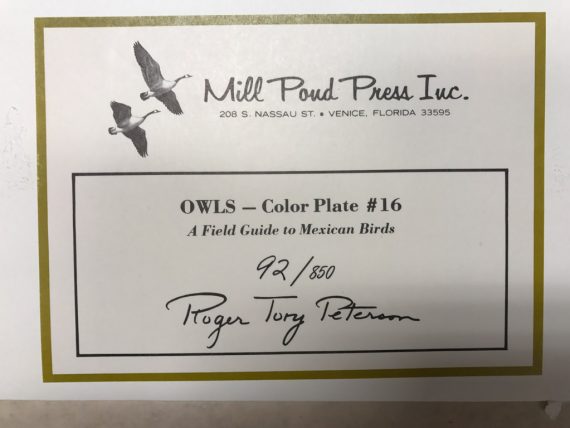 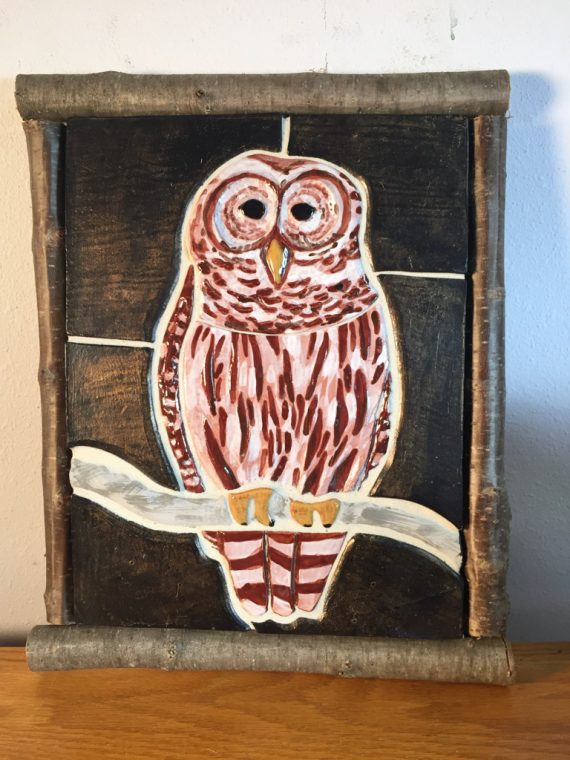 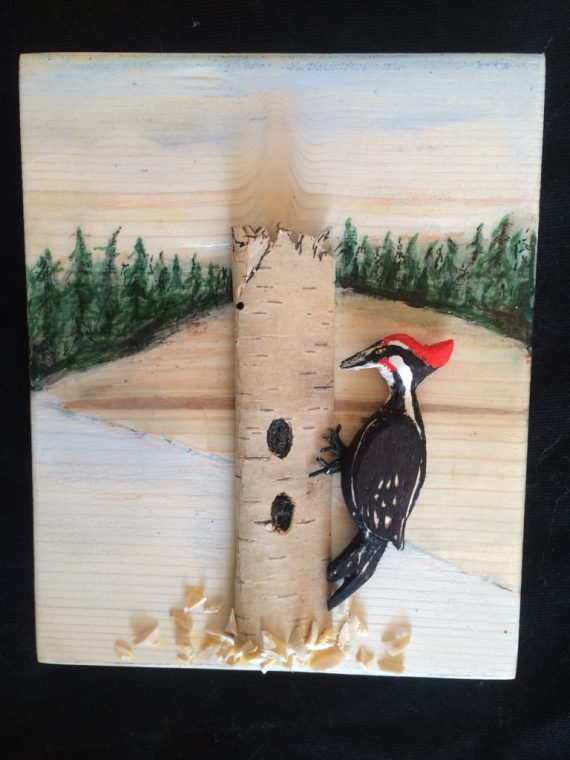 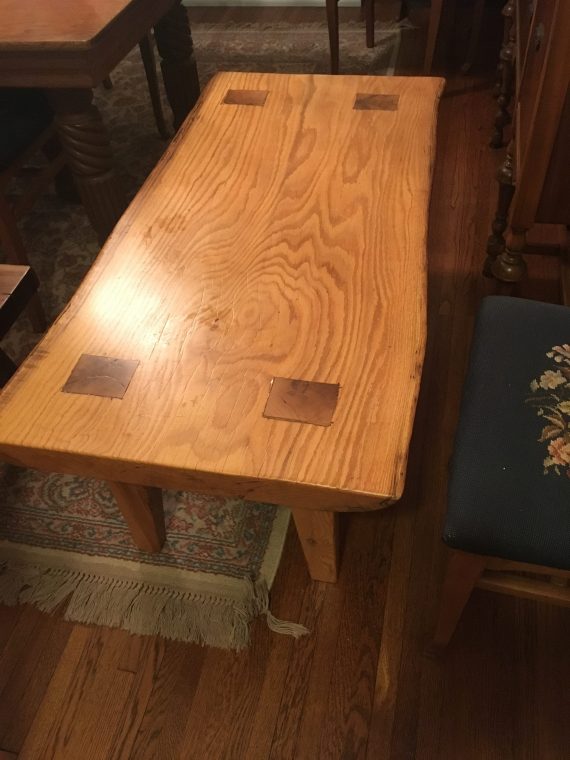 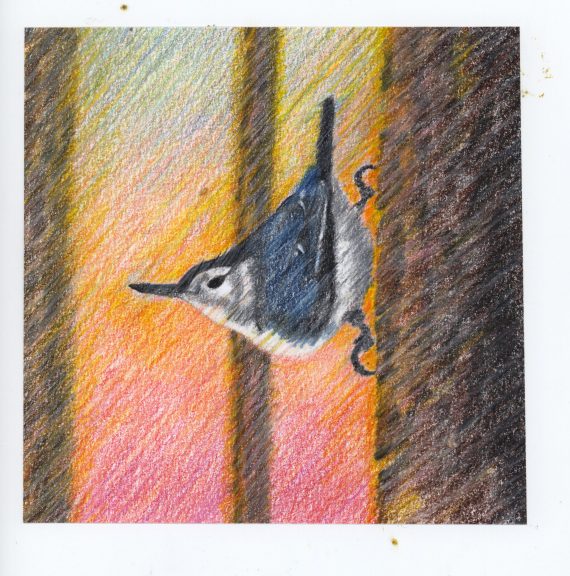 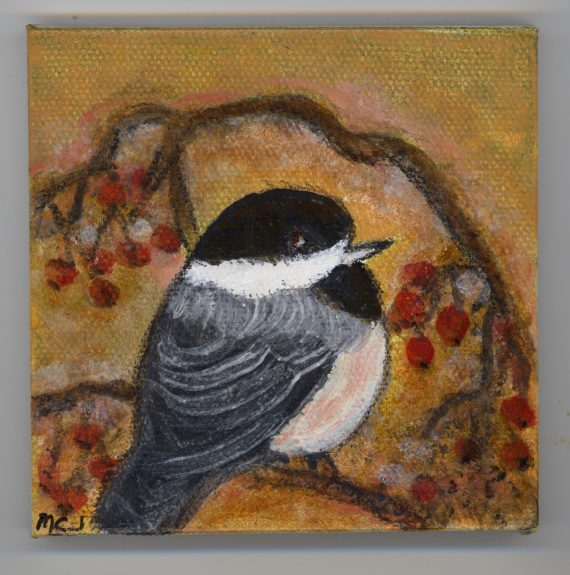 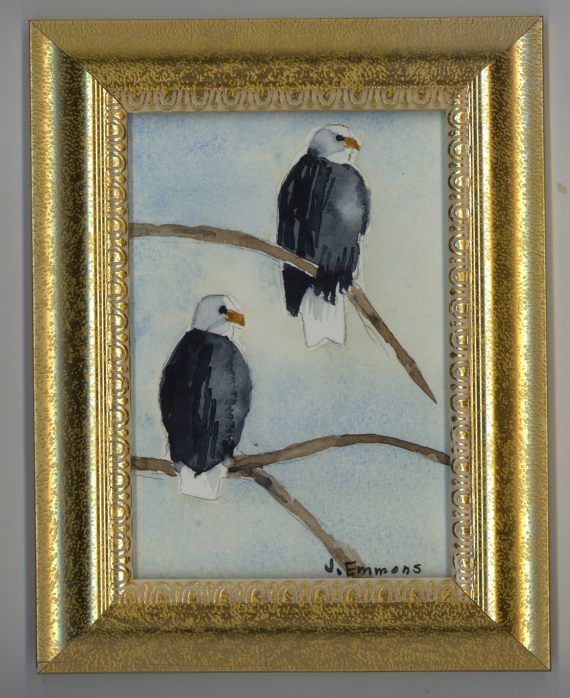 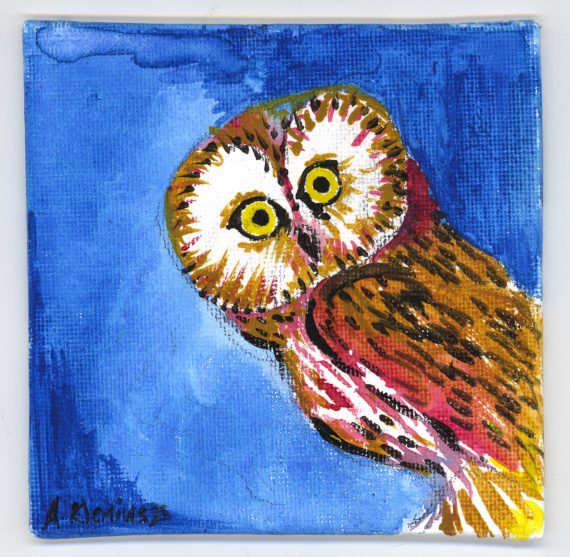 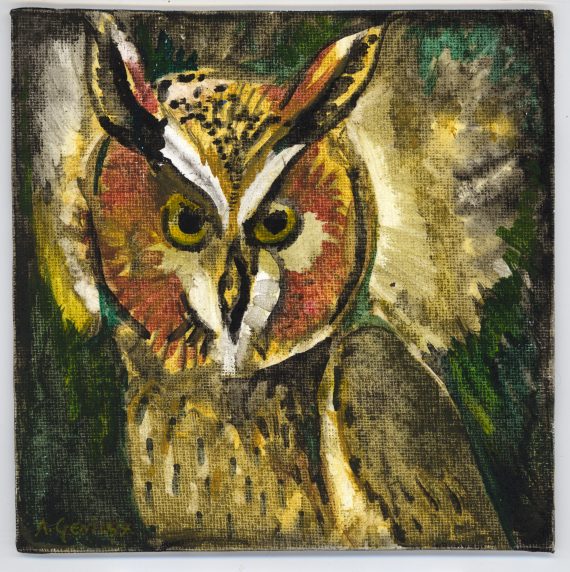 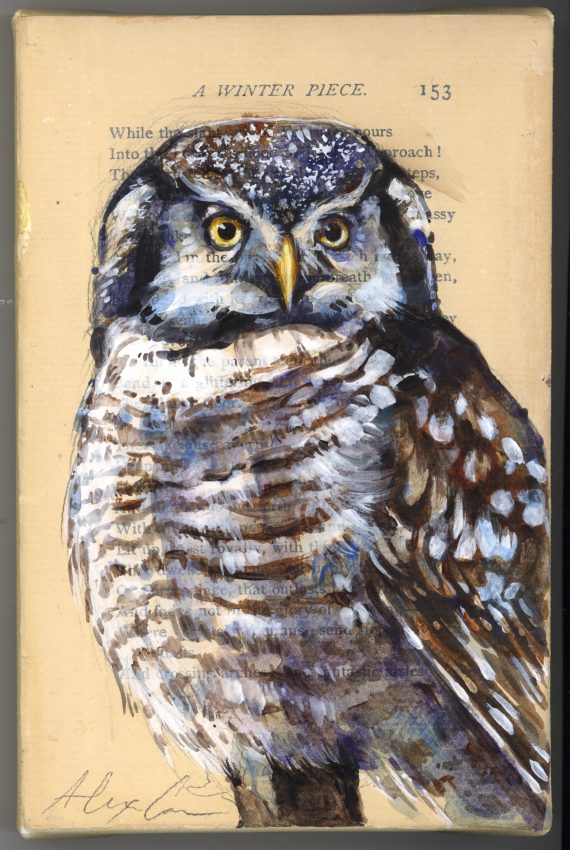 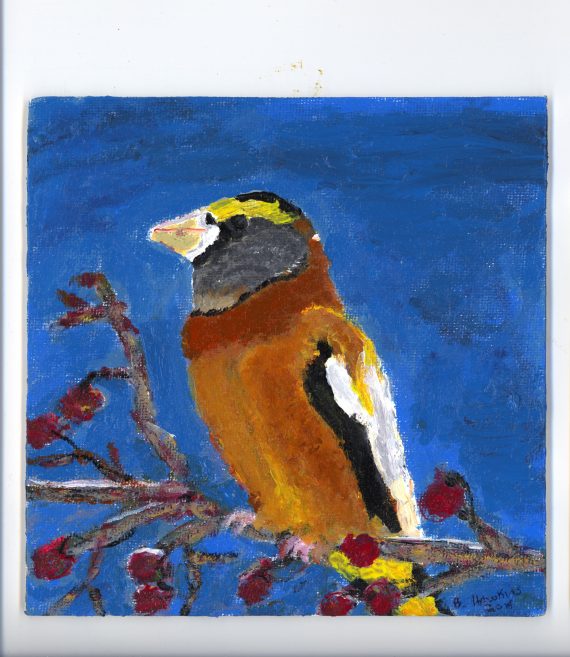 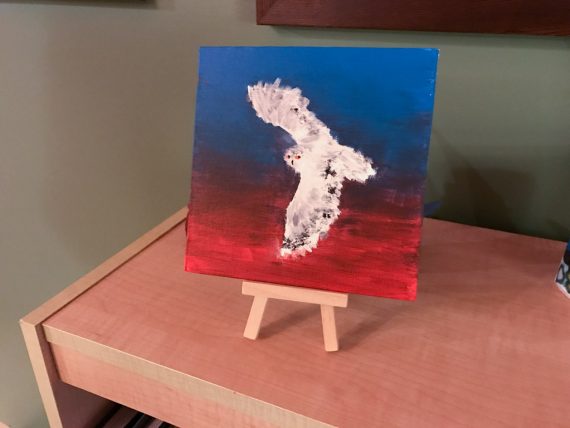 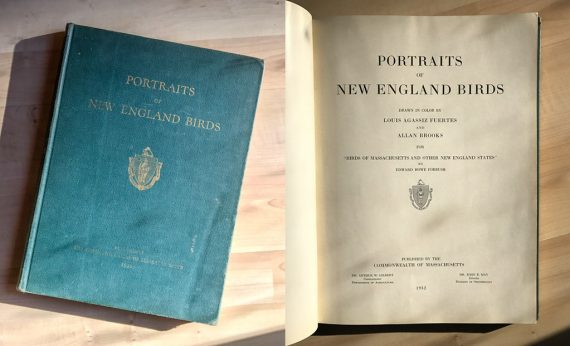 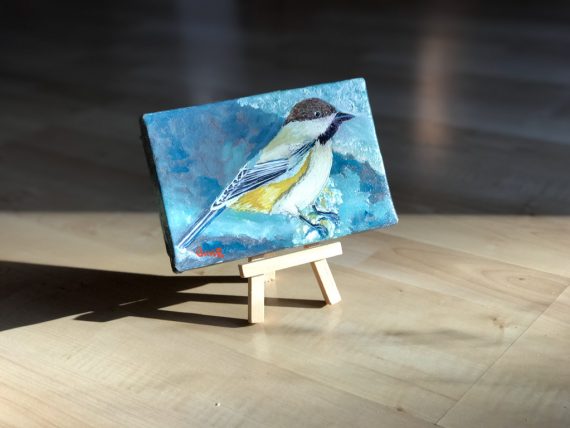 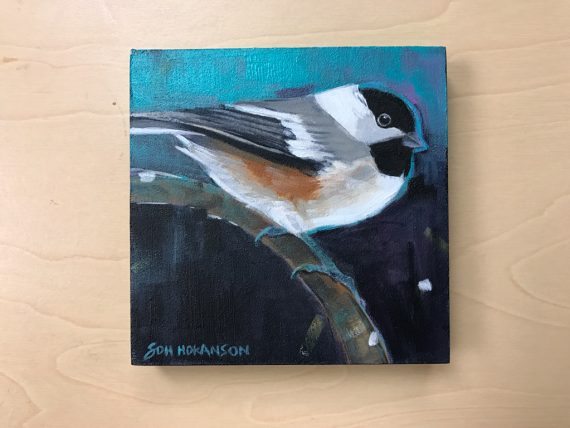