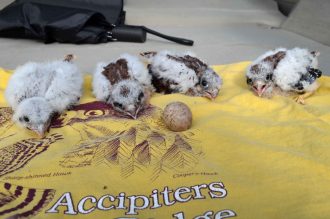 Four nestling American Kestrels post-banding, with an unhatched egg from our 2016 banding season.

It has been 4 years since Kate and Frank Nicoletti put up the first set of 14 American Kestrel nest boxes in the Sax-Zim Bog. In the four years, Friends of Sax-Zim Bog has been monitoring and maintaining those boxes, with the help of a cast of volunteers. Over the passed three years, however, there have been some exciting changes! This post will hopefully fill you in on the history and results of this project. 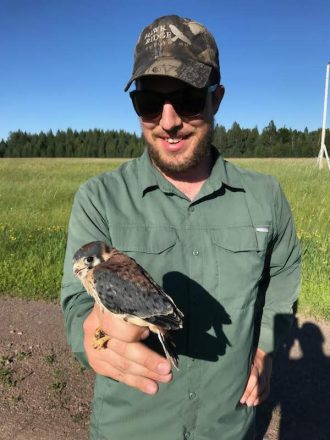 Head Naturalist Clinton with the final American Kestrel banded during the 2018 season. This dapper male was the 44th banded kestrel on the season!

As has been posted in a previous “Bog Blog” post (here), American Kestrels are in a nation-wide decline. There are a number of reasons for this decline and one thing you can do to help curb this decline is to put up a nest box. American Kestrels are cavity nesters, meaning, they need old woodpecker nests, or old trees, or broken off snags to use as sites. Many grassland areas that these birds prefer have become devoid of trees, but do have a abundance of power poles or telephone poles, which are perfect places to mount boxes. In the summer of 2015, Kate and Frank Nicoletti placed the original 14 boxes through the Sax-Zim Bog. There was no standardized monitoring during this season (though three nests were occupied in that season), but the ground work was set to start a monitoring program. 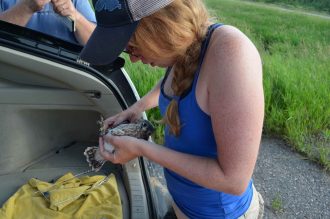 Eliza Grames banding a nestling during the 2016 banding season.

I began coordinating the project in 2016, with a set of three volunteers, Sarah Beaster, Mary Gabrys, and Sally Grames. During the first season of monitoring, a loose protocol was established based on nest monitoring protocol used in New Jersey. This project was used as a framework to help guide the work done in the Sax-Zim Bog. However, we did not have all the tools we needed to be initially successful. At first, we would monitor the boxes by observing from a distance and then tapping on the pole or box to see if a kestrel flushed from the box or not. This really only confirmed occupancy, but did nothing to tell us of the status of the inside of the nest. All was not lost in this first season, as Frank, Miranda Durbin, Peter Yokel, and Eliza Grames were able to band 21 chicks from 7 boxes! From the original 14 boxes, one box was out of commission. This box was attached to a tree which ended up falling down. The box is still in good shape, but a new location will be needed for this box in the future. 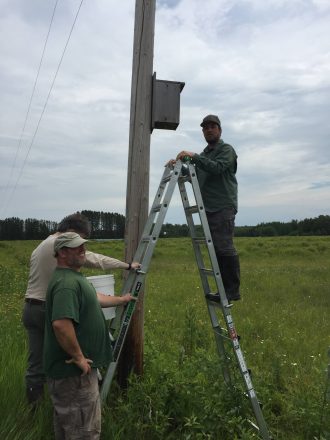 Banding crew getting ready to retrieve chicks from one of the 36 nest boxes in the Sax-Zim Bog.

At the start of the second season, we recieved funding for a GoPro, which allows us to record and view the inside of the box. This has been a helpful addition to monitoring for a number of reasons:

This is a major improvement over the first season. Not being able to see inside the box was a huge hindrance to banding chicks. American Kestrel chicks should be banded between 16 and 25 days of age. During the first year of monitoring, we had no idea how old the chicks were inside the boxes (or if chicks were present at all!). Frank and crew ran into the issue of having chicks nearly too young to band, in the same banding trip as chicks nearly ready to fly out of the nest! It is nice to have resolved this problem!

Who doesn’t love to see nestling birds?! Especially the fluffy little puffs of white that are American Kestrel nestlings! More importantly, however, we can also see interesting defensive behaviors of female kestrels who do not leave the box when we approach, or when the GoPro enters the box. Usually, when you find a nest, the female will leave and try and distract you (think Killdeer). Kestrels will generally sit on the eggs, barely moving, or will roll over with talons facing up to defend the nest from intruders! It is a cool behavior to see and would not have been possible without this GoPro addition!

Check out video from June 26 here!

We have been collecting data on these nests since the start, but with the GoPro we have been able to be more accurate in our reporting. Now we do more than just say, “Yep, the box is occupied!” We can now say, “Yep, the box is occupied! The female is sitting on 4 eggs, or there are chicks present and there are X chicks present.” This becomes more important when we look at the next section of this post! With the ability of the volunteers to collect robust data, see inside a nest box, and then potentially teach others (passersby and what have you), I feel like this project offers a lot to our volunteers and a lot the greater Sax-Zim Bog area.

In this second season, 7 boxes were again occupied, but there were at least two nest failures (one nest with missing eggs from one week to the next, and one nest that just failed). From the remaining boxes, 14 chicks were banded. This is a significant drop from the first season, but any additional chicks that fledge have the chance to add to the population of birds!

This season, 2018, started off with the addition of a few new boxes! During October of 2016, Sparky put out a call for volunteers and “Bog Buddies” to make American Kestrel nest boxes to be added to current 13 boxes. Through the winter of 2017 we received around 35 boxes! Over the next summer we added a few more here and there and were finally able to put up some of these boxes during March and April of 2018. This spring, Mark Dudek-Johnson, Frank, myself, David Alexander, and Mary Gabrys were able to add an additional 23 boxes, with 4 boxes reserved and placed as Northern Saw-whet Owl nest boxes. In total, we are now monitoring 36 (with one box still down) kestrel boxes! 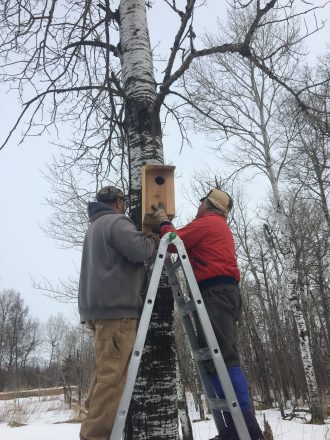 Mark Dudek-Johnson and Frank Nicoletti putting up one of the new boxes in March.

This season, we also added another step to our data collection, which actually makes data collection so much easier! We have begun to input our data to the American Kestrel Partnership’s website! The American Kestrel Partnership is part of the Peregrine Fund, and was started in 2012 in response to kestrel declines and is a partnership between citizen scientists and professional scientists to better understand kestrels across the US. (website insert) This allows our data to be used by folks looking into nesting of American Kestrels and to potentially be used by those interested in furthering American Kestrel conservation across their range. From our 36 total boxes, 12 were used by kestrels. We had two nest failures (one nest predated and one nest failed). This means 10 boxes were used and fledged chicks successfully! Frank, myself, Kristina Dexter, and David Alexander banded a total of 44 chicks from those 10 boxes making this year the best year yet for American Kestrel nesting in the Sax-Zim Bog! Due to the work of 4 volunteers, Sarah Beaster, Mary Gabrys, Sally Grames, and Jean Elton-Turbes, we were able to make two separate trips to the Bog to maximize our success in banding and also to make sure that we were able to ground-truth the data collected by volunteers, as it is hard to age chicks in nests and we can only do so well by checking out the GoPro footage. 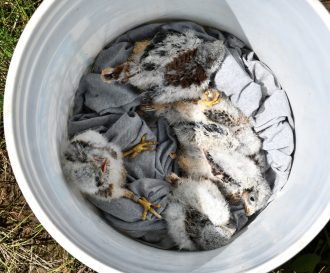 These kestrel chicks are getting a rest after just being banded. These chicks are about 18 days old and are the perfect age to band! 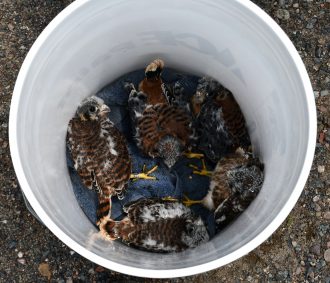 These chicks are a little bit older than the chicks in the photo to the left, at about 24 days old. You can really see how much difference a few days of growth makes.

So, what is next for this project? Much of the work that needs to be done will take place next March and April, where we will have to clean out boxes from this summer’s use, as well as add new nesting material (wood shavings) to the boxes. Some routine maintenance will also take place. Remember that box that fell down sometime before the first year of monitoring? It is going to get replaced! There is also a box along Sax Road that is placed on a power pole that is leaning pretty significantly, which will need to be moved. However, the big project…. add more boxes!! Frank would like to reach 100 boxes eventually, however, I am hoping that we can hit 50 boxes. That means we need 13 more boxes to be built! Can you help us reach 50 boxes? Here is a reminder of the directions that can be used to make and donate a kestrel box for this project! 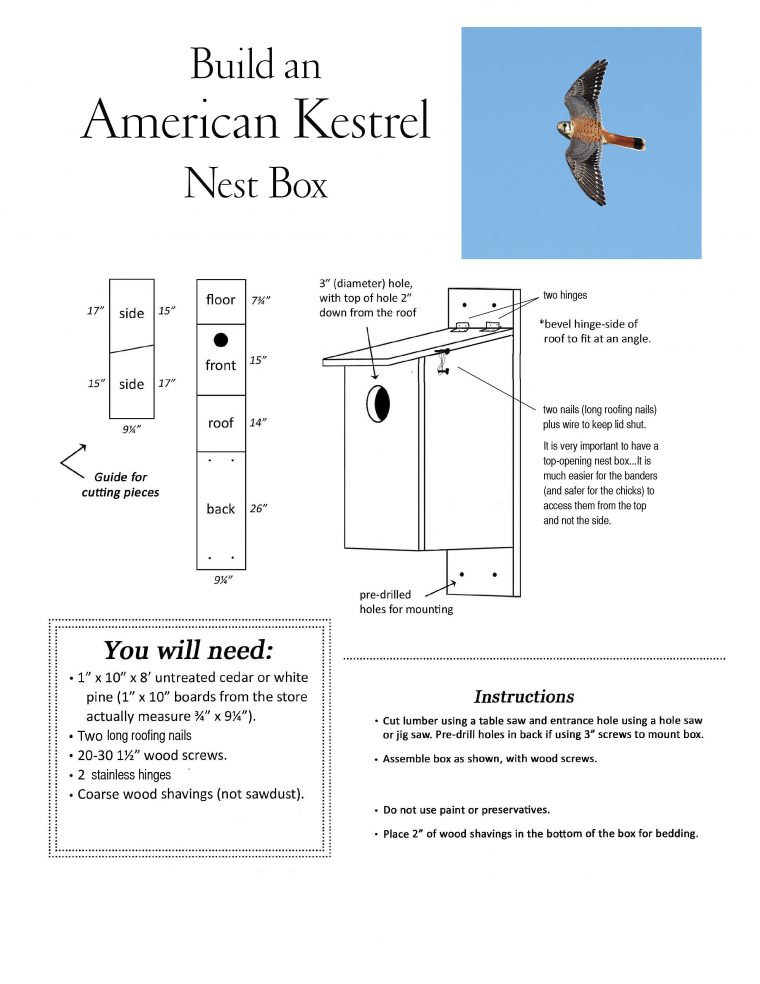 This is a fun project and has potential to help grow the regions American Kestrel population. Many thanks to all of those folks who have built boxes in the past and those who will  be willing to help us out in the future! I also would like to thank our volunteers that have given lots of time to this project, especially Sarah, Mary, Sally, and Jean for monitoring boxes, to Kristina, David, and Frank for help with banding, and to Frank, Mark, Mary, and David for help putting up and doing maintenance on boxes this spring!

If you have interest in volunteering to help monitor nest boxes next season, or if you are interested in volunteering during the spring with placing and maintaining boxes, feel free to send me an email noting your interest: naturalist@saxzim.org.

Until then… I will see you in the Bog!